Tutankhansetamun is one of the main protagonists in the series and in the movie.

Tutankhensetamun (His nickname is Tutenstein, a wordplay on Frankenstein, often shortened to Tut) is a mummified 10-year-old that lives in The International Museum of World History. His tomb is filled with all of his belongings, including His sarcophagus, His statues and Ankh, and many other toys and games, including his favorite Senet set. He is often visited by Cleo and Luxor.

Awakening of the Pharaoh

A very rude and egotistical mummy. He lived a spoiled and lazy life and had a best friend Nutka. The two would often trick the other children in Egypt or come up with scams to steal things such as honeycakes and toys.

While it is unknown how he died, the introduction sequence portrays Tut playing with the Scepter and being plunged into darkness. However, he has mentioned on at least one occasion that he got sneezy before he died, showing he may have succumbed to disease. Other sources indicate he may have been assassinated.

In the movie "The Clash of the Pharaohs" its revealed he died while saving Nepka (Another friend) from a tomb that was collapsing in which he was crushed to death. Though it's revealed that Tutenstein died under falling rocks, his body is extremely in tact, which means he wasn't crushed to death. So it's entirely possible to believe that he died from head trauma, but it's just as likely he might have suffocated or bled to death. It's also possible that he temporarily survived the accident but died from infection as Tut mentions that he fell ill prior to his death.

Tutankhensetamun died at the age of ten, reawakened about three thousand years later by Cleo.

What is that Mummy up to?

He often has trouble with gods or ancient scripts. His only friends are Luxor and Cleo because everyone else he knew in life has died.

When he's not doing something he shouldn't, Tut spends most of his free time in his sarcophagus because he must hide all day. He owns The Scepter of Was and he likes to play Senet with Cleo.

Although he seems to ignore Cleo's warnings, he does seem to care for her very much. He would even go to great lengths to try to save her life in "Near Dead Experience" when he thought she was going to die, saying, "Cleo, I will do everything in my power to save you — even risk my own afterlife!"

Tut got punished by Isis for cheating of the game of Senet.

He is considered by many people to be a Sagittarius, Taurus, or Aquarius.

Tut also owns a variety of items, including 'Shabitis', His 'Shakey' and other things found in his 'storage room'.

Tutankensetamun comes across as rude and egotistical, but to be fair to him it is understandable as Egyptian pharaohs were believed to be gods. Along with the fact that he is still a child, and Tut's rude-side comes out whenever Cleo or Luxor questions his authority and whenever someone else treats him horribly. Whenever he gets angry, he's prone to threaten horrible torture upon whomever angered him though it's clearly shown to be a case of spur-of-the-moment show of power as he's never shown to do anything about those who anger him, despite the fact that possessing the Scepter of Was would allow him to do so.

It's also worth noting that the only role models that Tut has, apart from Cleo and Luxor, is the Egyptian gods, who are more-than-happy to threaten a ten-year-old child with eternal damnation for crimes like vandalizing a wall or cheating at a board game. Cleo even points this out, mentioning that in spite of his position, Tut is just a kid. In fact most of the Egyptian Gods are shown to be far more temperamental, arrogant, and dangerously and randomly vindictive than Tut and often are the cause of many problems in different episodes (e.g. the Goddess of Love Hathor becoming offended that Tut wasn't getting respect and having a pyramid built for him so she turns into Sekhmet to kill some construction workers, the God Ra being furious at those who deny his authority, the Goddess Isis trying to eternally damn Tut for vandalizing a wall and cheating at a board game, etc.) Set happens to be the worst of the bunch.

Despite his flaws, Tutankensetamun is shown to be rather intelligent, which is clearly shown when he rewrites Cleo's ancient Egyptian assessment and earning her an "A" and the way he uses reverse psychology and trickery in order to outwit the god Set and his minions.

Tut is also far from afraid to tell people what he truly thinks such as when Cleo wears her hair in a braid and he admits that it looks like "a donkey's behind" which is notable as he mentions in the episode "Irresistibly You" that he sees her as "Pleasing to the eye and a worthy friend." meaning that he believes that Cleo is pretty as she normally is. He's also shown to have a strong sense of morals, shown in "Truth Hurts" when he is absolutely aghast at the mere thought of lying.

Tut is also shown, both past and present, to truly care about his friends which is seen in "Near Dead Experience" after Cleo falls ill he tells her "Cleo, I will do everything in my power to save you — even risk my own afterlife!" and he's revealed to have died saving his friend Nepka from being crushed, despite knowing that doing so would result in his own death. The episode "Curse of the Pharaoh" reveals that it's not just his friends that Tut is willing to save but he also willing to save people that he'd consider his enemies such as El Zabkar, who had summoned Ammut out of the fear of the Pharaoh's curse. 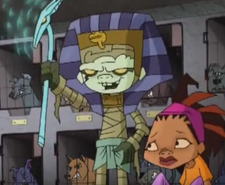 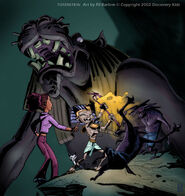 Concept art of Tutankensetamun, Cleo, Luxor, Set and his minions. 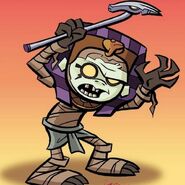 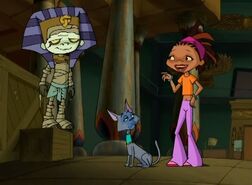 Tutenstein with Cleo and Luxor. 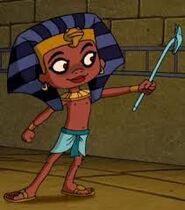 Tutenstein in his alive years before his death. 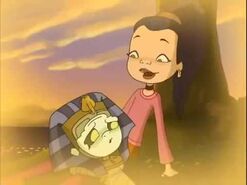 Natasha and Tut.
Community content is available under CC-BY-SA unless otherwise noted.
Advertisement